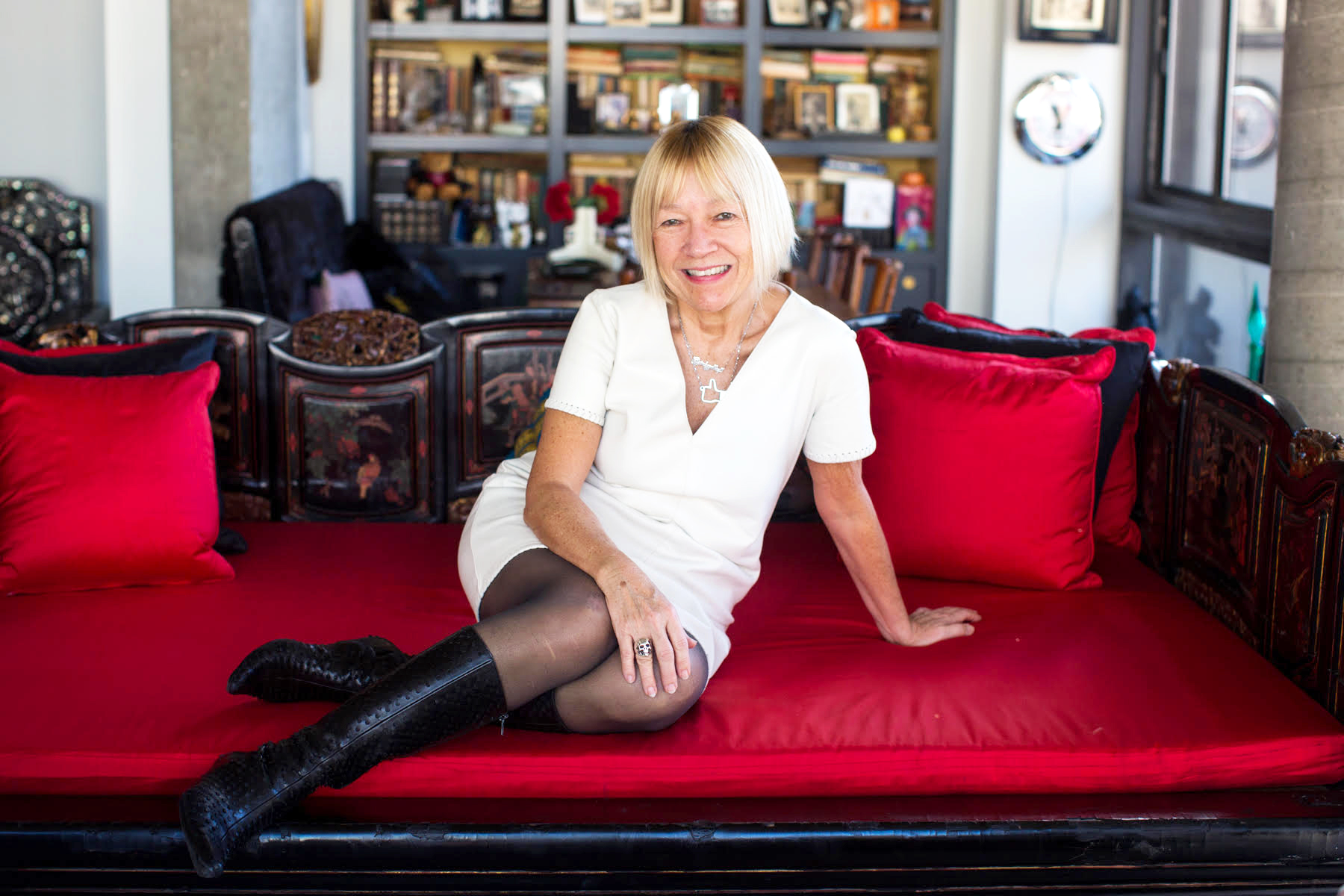 Cindy Gallop is a marketing guru, a sex revolutionary, a force of nature, and the only person to describe a certain sex act on the TED conference stage six times in a row. She spent decades in the advertising world, working at some of the world’s biggest agencies and on the biggest brands, and speaks at conferences and in front of business leaders all the time. She famously believes that we all need to have our own “default throwaway descriptor,” which she defines as the way people describe you when you leave the room, and that we should all be proactive and create our own before others do it for us. Cindy’s self descriptor is that she’s the Michael Bay of Business. “I like to blow shit up.” There’s really no other word to describe Cindy Gallop other than “ballsy.”

I know her from a women’s networking group we both belong to, which includes all sorts of female executives and founders– women who know people and who know how to get stuff done. Cindy proposed to the group after reading someone’s idea on Twitter that there should be a Cindy Gallop lipstick color. No sooner had she floated the idea in a chat then she was in touch with a manufacturer and a brand to launch it for her. Seriously, she’s a force of nature.

In what may be described as her most ballsy move yet, she founded a business called MakeLoveNotPorn in 2009. She came up with it after realizing from her own experience dating younger men that since we don’t talk about sex in the real world, with the ubiquity of readily available pornography, young people are growing up with very little idea of what real-world, healthy sex is. There are so many menopausal symptoms and body issues affecting women’s sex lives at this phase of our life age, I knew I had to speak to Cindy about how to find our confidence.

Anne: I've learned a ton about you, but I'd really love to know first and foremost, were you born this confident and outrageous and willing to speak your mind or did it happen over your long and illustrious career?

Anne: We can all learn from the lessons you've taught, but I'm wondering what you might tell someone who's not born that way, or as happy to be themselves as you are. How would you engineer that?

Anne: In theory and intellectually, I don't give a damn what anyone thinks, but it becomes more of a tough emotional reality, especially as your body declines.

Anne: Okay. Tell me how, how does your body improve as you get older?

Cindy: First of all, it is all in the attitude. I am happier with the way I look at this point in my life than I ever was before. And secondly, like anything else — wine matures, steaks mature, all the great stuff matures — your body gets better. The older you get, there's no decay or decline about it.

Anne: I love that idea. We do hear from our Alloy members about self-image and how you feel about your body as you get older, that people feel more self-conscious about their bodies and therefore are not feeling as liberated or as comfortable in the bedroom as they were when they were younger.

Cindy: This is one of just many reasons why they all need to sign up to MakeLoveNotPorn immediately and because one of the many, many social benefits that we bring to the table is that we celebrate real world everything-- real world bodies, real world hair, real world penis size, real world breast size. This is critically important because you can talk body positivity all you like. You can preach self-love until you're blue in the face. At the end of the day, nothing makes us feel great about our own bodies like seeing people who are nobody’s idea of aspirational body types, getting turned on by each other, desiring each other, having an amazing time in bed.

There are obviously books and articles and whatever, but it really isn't until you see how incredibly hot, attractive and desirable real-world bodies are that that message really comes home in a very visual way. I'm enormously lucky because I experience this all the time from younger men. I've been dating younger men for many years and I strongly recommend any older women who are free agents able to do this, date younger men. I have never been told I'm beautiful as often as I have dating younger men. They just think everything about my body is fantastic.

What makes you hot and desirable and sexy is you, the individual you are. That's what your lovers, your future partners are attracted to.

Anne: I’m curious about how you got the first people to film themselves. Are there hundreds and thousands of people who are just willing to put their own sexual activity online?

To get people to want to do this, I had to create a completely safe and trustworthy space, so I designed MakeLoveNotPorn around what everybody else should have, but nobody else did-- human curation. There is no self-publishing of anything. Our curators watch every video submitted from beginning to end, before we approve (or reject) it. So I had the concept and began building it. Then obviously we had to seed the platform with content pre-launch. My curator Sarah spent a whole year asking everybody in our networks and complete strangers, Will you film yourselves having real world sex for us?

Anne: How did that go?

Cindy: Any time I had a conversation about MakeLoveNotPorn, I would always end by asking, Would you be interested in contributing content? I found out that 99% of the time, the answer is yes. The desire to do this lies a lot closer to the surface within many more people than anybody would ever have thought. Given our social mission and our social values, people jump at the chance. We operate a revenue-sharing business model-- our members pay to subscribe and rent social sex videos, and 50% goes to our contributors, whom we call MakeLoveNotPornstars. But the money isn't the primary incentive. I designed our revenue-sharing business model to democratize access to income because I feel very strongly that everybody should realize the value of what they create.

Anne: Have you ever been afraid of anything?

Cindy: Oh, all the time.

Anne: Were you ever scared for a meeting or a confrontation?

Cindy: All the time. I am scared shitless. Every time I speak publicly out on stage really. The day I’m not is the day I worry about myself. I think it's very healthy to have a sense of  worry about how well you're going to do. That's entirely natural and entirely healthy.

Anne: Do you feel liberated from having left the corporate advertising world?

Cindy: I don't miss the corporate world at all. I've been campaigning for decades for my industry to change the way it operates, because it's as white-male-dominated as every other industry. So the work continues.

Anne: Do you think it's getting better?

Anne: Would you talk a little bit about your own menopause or menopause experience?

Cindy: I was incredibly lucky, you know, at the age of 50, my periods stopped. That was it. No hot flashes, no mood swings, no symptoms of any other kind. As somebody who had never wanted to be married, never wanted children, it was such a relief to no longer get my period. What a bloody nuisance that was. I feel mildly guilty that my experience was great.

Anne: What would you tell your 25-year-old self?

Cindy: Don't give a damn what anybody else thinks.

Anne: Any tips we can put into motion?

Cindy: I believe that everything in life starts with you and your values. Take a long hard look into yourself and identify what you stand for, what you believe in, what you value, what you are all about. First of all, that makes life so much easier. Life still throws at you all the shit it always will, but you know exactly how to respond to that in any given situation in a way that is true to you. That is the secret of happiness: living your life and working your work in a way that is true to you. Secondly, that's what gives you confidence. All that matters is what you think of yourself and that you feel good about what you're doing.

Anne: I find it harder today than I would even have thought to just not worry about what people think and stay true to your values.

Cindy: Another thing is to stay away from people and places and things that make you feel bad about yourself. Actively make that choice. Don't go there.

Interview edited for clarity and length.

Go ahead, you deserve to